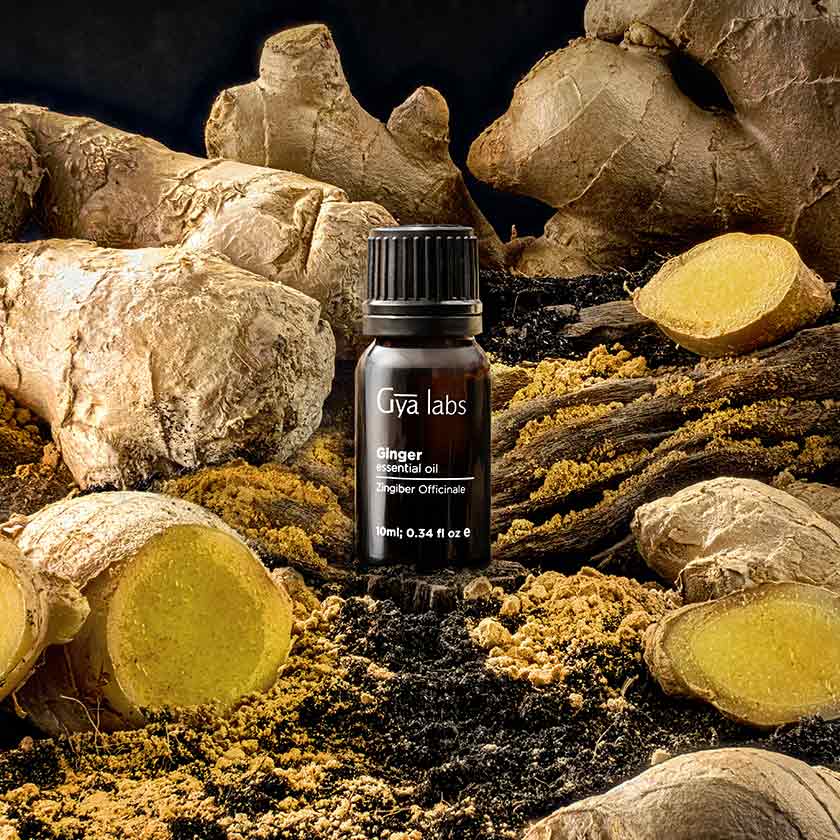 Talk about traditional medicines that have been around for ages and used for numerous purposes and ginger will definitely be amongst the top five names that pop up. And ginger has good company as well because it belongs to a group of plants that also includes cardamom and turmeric. And the goodness and uses of cardamom and turmeric are well known (or a topic for a different article). The scientific name of the ginger plant is Zingiber officinale and it was first used in China and India before spreading its flavour and fragrance to the rest of the world. The plant is a flowering plant, but the ginger that is widely used is from the rhizome of the plant from which the roots shoot off. Ginger roots are quite popular but of late the essential oil of ginger is also gaining popularity because of its properties and benefits.

Ginger essential oil consists mainly of monoterpenes and sesquiterpenes. Its constituents include citral, linalool, camphene, alpha zingiberene, phellandrene, beta sesquiphellandrene and zingiberenol. The medical properties of ginger and its variants are due to the presence of these compounds. For example, the compound phellandrene has been clinically found to increase energy and possess even cancer treating properties. With all these compounds and the properties it imparts, ginger oil is useful in many health related issues.

Ginger oil, like most other Gyalabs essential oils is extracted from a plant through the distillation process and hence very concentrated. The aroma of ginger oil is similar to that of a crushed ginger root; however, depending on its concentration it may be strong and pungent. It is often used in aromatherapy. Ginger oil blends are also quite popular in aromatherapy. The essential oil can prevent and treat several health issues, but it is prevalent in the treatment of skin and hair conditions. By using ginger oil some of the following issues may be treated – cold, headache, migraine, nausea, arthritis, digestion issues etc. It should be known that besides ginger essential oil, ginger is available in other forms as well. Some of the ginger products are used for direct ingestion and others are used as flavouring agents. Some of the forms of ginger are as follows: dried, oil extract, pickled, fresh and raw, and candied.

Now before understanding the benefits of ginger oil, it should be known that the research on the usefulness of ginger essential oil for health is limited. However, several researches have been conducted on the effectiveness of ginger and its compounds. Some of the research and its findings are mentioned here.

Over ten studies were conducted to find the effect of ginger on nausea during pregnancy. It was established that taking ginger or ginger supplements relieved nausea in pregnant women.

Ginger is an effective remedy in treating several digestion issues, however a study done in 2018 found that ginger had no effect in treating irritable bowel syndrome.

Another research substantiated the presence of a large number of bioactive compounds in ginger that promote good health.

These researches prove that ginger, and as its extension the ginger essential oil, have several health benefits, so here are a few of those benefits.

Anti-inflammatory property – The anti-inflammatory property of ginger is made use of in treating diseases such as arthritis and asthma. Currently some researchers are conducting research to scientifically prove the fact. A study in 2018 found that ginger essential oil protected the kidneys of rats from (induced chemical) damage. Another study was conducted on rats to find the effect ginger had on rheumatoid arthritis. It was found that ginger was able to reduce the swelling in the joints. When ginger oil or its blends was rubbed on the affected joint region, the pain and swelling reduced significantly. Many people follow a ginger rich diet to lose weight. To find the truth behind this premise, researchers increased the ginger intake of people on a carb diet. It was found that when the dosage of ginger was higher, the weight gain decreased considerably.

Ginger oil for skin care – As mentioned earlier, ginger oil is mostly used in skin care. Its anti-inflammatory property lightens the skin’s appearance by getting rid of acne causing bacteria and fading acne marks. In a 2015 research, the effect of essential oils on skin was carried out. The purpose of the research was to find an ingredient for adding to an anti-wrinkle cream. Ginger oil was amongst the top essential oils that improved skin health. It was because of its antioxidant properties. When ginger oil and other essential oils were mixed with the face cream and tested on a group of volunteers it was found that their skin became smoother.

Side effects of using ginger oil

Ginger oil is generally considered to be safe oil, but a few side effects have been reported by some users. The main side effect of ginger oil is in its topical application. Ginger essential oil is concentrated and should be diluted enough before direct application on the skin. A patch test must be done before applying it for the first time.

There are several ways of using ginger oil, but we will discuss inhaling it through steam. Here are the steps for steam inhalation of ginger oil –

4.       Move towards the bowl and before inhaling shut your eyes.